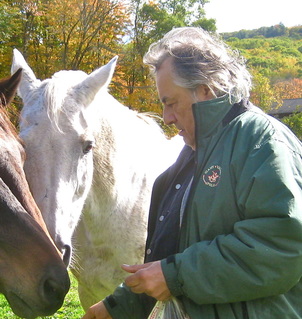 Franz Douskey is an American writer. He has been published in nearly two hundred publications since the late 1960s. Currently residing in southern Connecticut, Douskey has lived in Memphis, New Orleans, Tucson, and the West Indies. His recent book, "West of Midnight," was nominated for a Pulitzer Prize in poetry in 2012.

William Packard, editor of the New York Quarterly, listed him as an influential writer, along with James Dickey, with whom he traveled from time to time (read "Remembering James Dickey" in The New York Quarterly 61). Douskey's version of "Chief Joseph" was published in 1980, (Inland Boat Series) a few years before Robert Penn Warren's Chief Joseph of the Nez Perce was published (1983).

While in Memphis, he became friends with Sam C. Phillips, founder of Sun Records, an early mentor. He traveled extensively in the 1960s before settling in Tucson. It was there that he met poet Richard Shelton, Edward Abbey, William Eastlake, Raymond Carver, and Charles Bukowski.  His interest and experiences in music led to the publication of a biography of Frank Sinatra and a book about Memphis roots music and Elvis (Elvis is Out There). In 2015, Mayor Mark H. Luttrell, Jr. of Shelby County, issued a proclamation honoring Douskey for his role in taking the Memphis sound out into the world, and the Governor of Tennessee appointed him an "honorary Tennessean."

He has read at the University of Georgia, the Donnell Library (with F. D. Reeve) the Cronkite Graduate Center at Harvard, Yale University, Goddard College, New York University (Albany), University of Arizona, and the New School of Social Research, among others. He occasionally read with Allen Ginsberg, who was a long time friend and correspondent.